Development and application of methods for dementia care based on knowledge from the field: initiatives at Benesse Institute for Research on KAIGO (Continuing Care)

Benesse Institute for Research on KAIGO (Continuing Care) is the research arm of Benesse Style Care, which operates the nursing care business in the Benesse Group, and it implements innovative measures for nursing care and dementia care. We talked to staff from the institute about their work and a presentation made at the 1st Japan-UK Dementia Conference. 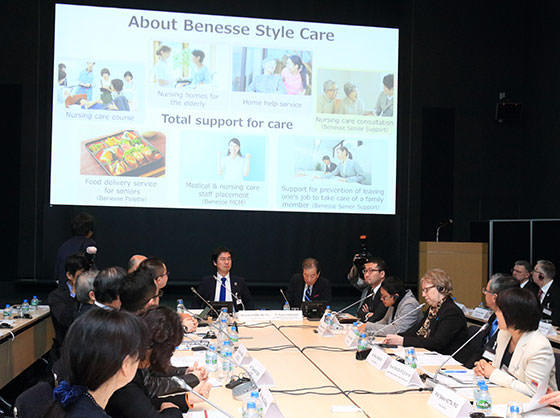 Benesse entered the nursing care business in 1995 with a view to make society a place where the older that people get, the happier they will be. Benesse Style Care, which operates the group’s nursing care business, has developed its operations based on a guiding principle of delivering service “focused on one’s way of being”(*1). On 11 November 2015 (Nursing Care Day) it established Benesse Institute for Research on KAIGO (Continuing Care) as an R&D body.

The elderly population in Japan is expected to reach 36.77 million by 2025 (*2), the year when the baby-boom generation moves past 75 years old. As we approach a super-aging society, the issue of nursing care will place a heavy burden on people in the prime working years of life. As a major factor driving the need for nursing care, dementia in particular is a social issue that requires government, public bodies, and private-sector companies to work together.
Against this historical backdrop, we talked to staff from the Benesse Institute for Research on KAIGO (Continuing Care) about the innovative measures for nursing care and dementia care it implements and their presentation at the 1st Japan-UK Dementia Conference.

We asked Benesse Institute for Research on KAIGO (Continuing Care) Secretary General Taisaku Okumura about the institute’s research topics.
“The institute focuses on three main themes: tackling unresolved issues in the elderly and nursing care sphere; publicizing facts about the state of care homes and the opinions of residents, their families, and staff members; and research focused on the development and careers of nursing care staff. We sometimes publicize information about their themes via our website and other means.”

The institute is currently directing its attention to a dementia care project. Ms. Ryoko Fukuda, Senior Research Scientist at said: “Ideas on ways” to care for dementia patients tend to be restricted to each care home, and there is very little sharing of knowledge. However, we thought there were a variety of things that homes could learn from each other. So we collected successful examples by going to different care homes, sitting in on staff meetings, and taking to operational staff. After analyzing and systemizing the data we collected, we produced the “Dementia Care Methods,” a set of 29 care tips.”

"We published the 29 methods, which include things like “Do it now”, “Do what you please” and “natural participation in activities” on a set of cards to make them easy to use on the frontline, and also included illustrations to indicate what kinds of things staff and residents should do and what kinds of results to expect.
In order to assess what kind of results the method can produce in real situations, we continue to conduct testing and verification at a small number of Benesse Style Care homes."

Benesse Style Care made a presentation on this initiative at the 1st Japan-UK Dementia Conference, an event held with a view to raising awareness of the importance of international cooperation on dementia initiatives.

Ms. Fukuda was the moderator and a speaker in the Social & Care session, while Mr. Takahiro Shimura, manager of Benesse Style Care’s Kurara Miyamaedaira home where the method is being tested, made the actual presentation. The presentation to the conference was titled “Create daily lives in nursing homes together with community.”

Mr. Takahiro Shimura, manager of Benesse Style Care’s Kurara Miyamaedaira home were the method is being tested, grabbed the interest of conference participants with a description of the following practical examples.

“Applying the “Dementia Care Methods” approach of “scattering around things to stimulate the five senses”, at our home we have created an environment of things to arouse the interest of residents and provoke voluntary activity, such as cooking, knitting, and learning how to wear a kimono. One day, we harvested some eggplants we had been growing in front of the home and placed them in the living room. This caused one resident to take a strong interest in them and begin talking about how to cook them into a delicious dish. This resident had previously usually stayed in her own room, but this instance led her to come into the living room more and more.”

“When one resident starts doing things like this it stimulates interest among others and they soon join in. This is an example of one method, “natural participation in activities.” In addition, when someone has achieved something it makes people around them “feel happy together” and produces a sense of satisfaction, which in turn creates confidence and a feeling that they want to do other things. By applying each of the methods in such ways, we have been able to gradually create a cycle of voluntary activity.”
“Things that people used to do naturally but became unable to do at their own home. Things that they would not do alone by could do in a care home. Things they can do if there is someone else around, and things they can do for others. I have begun to think that the actual role of a nursing care home is in areas like these.”

“What kind of lifestyle did each of the residents have before? What are they interested in and what do they want to do? These methods are ways we can take account of residents’ previous lives and try to respect them, in keeping with Benesse Style Care’s guiding principle of delivering service “focused on one’s way of being” (*1).”

Mr. Takahiro Shimur also discussed other results of the test:
“Care home staff had previously found dementia care troublesome and tiring. However, once they left behind their preconceptions and began using these methods, they found residents were able to get back to their old lifestyles which also made things much easier for staff themselves, and they are now much livelier. Another outcome has been to reduce levels of staff departures.
Increased activity by residents has produced improvement in their assessed nursing care levels (*3) and also raised the occupancy rate at the nursing home.” *(In order to receive long-term care benefits, an insured person has to obtain certification of their long-term care needs. There are seven levels of care needs: support required levels 1 & 2 and long-term care required levels 1-5.)

The conference featured examples from both Japan and the UK which highlighted that dementia is not a disease but something that could happen to anyone, and also that dementia care needs to be tackled as a social issue on a worldwide scale to ensure that the affected person can live without losing their individual personality.
In an era when people living to 100 years old is not unusual, a new approach of conceptualizing countermeasures and turning them into a method could lead to solutions that cross institutional and national borders.