Wanting to talk to children about the SDGs in their own words: thoughts on TIEI’s new employee workshop

High-quality education for all Supporting economic growth and meaningful work

As teaching about SDGs increases in schools in a bid to create a sustainable society, Tokyo Individualized Educational Institute, Inc. (TIEI) has begun an employee workshop that uses the “2030 SDGs” card game. The workshop has initially been made available to around 250 frontline employees in the Greater Tokyo region, with the aim of helping them use their own words to talk about and share their thoughts on the SDGs with the children they meet every day, ranging from elementary school students to high school students. In addition to being a valuable experience that can make society as a whole better, it represents an important opportunity to develop their approach to their work.

The SDGs (Sustainable Development Goals) were adopted as international targets at a UN summit in September 2019.
https://www.benesse.co.jp/brand/about/about_sustainability/

TIEI is a Benesse Group company that operates schools offering individualized tuition. As a company involved in connecting with people, including the younger generations that will bear the main responsibility for creating a sustainable society, it aims to contribute to the achievement of the SDGs through its business activities. The employee workshop was established by Mr. Shinya Kanbara, General manager of the no.1 business Divisions, which coordinates the activities of classrooms throughout the Greater Tokyo region, and it resonates well with company policy.

Mr. Kanbara said: “A few years ago, I heard that a friend was acting as a facilitator for using the 2030 SDGs card game with elementary and junior high schools, and I took part in the game because I thought, as someone in the education sphere, I myself should know more about the SDGs. Playing the game gave me not only a deeper understanding of the international goals, but also taught me the importance of thinking about things from another person’s perspective, and I thought it was extremely interesting. I asked my company’s president directly if we could adopt the game as I believed it could give our employees an understanding of the true meaning of the SDGs while also furthering their emotional development.

With the agreement of his company, Mr. Kanbara immediately decided to try using the game with managers and assistant managers of classrooms in the Greater Tokyo area (*1). Here we report impressions from the six sessions held during September and October 2019, which involved roughly 250 employees.

Simulating the journey to 2030: creating an ideal world is very challenging

All countries will have to work together if the world is to achieve the 17 SDGs. While enjoying playing the 2030 SDGs game, participants are able to understand and experience this requirement for themselves. Split into project teams of several members, they must seek the ideal balance for a “world” inhabited by all the teams. 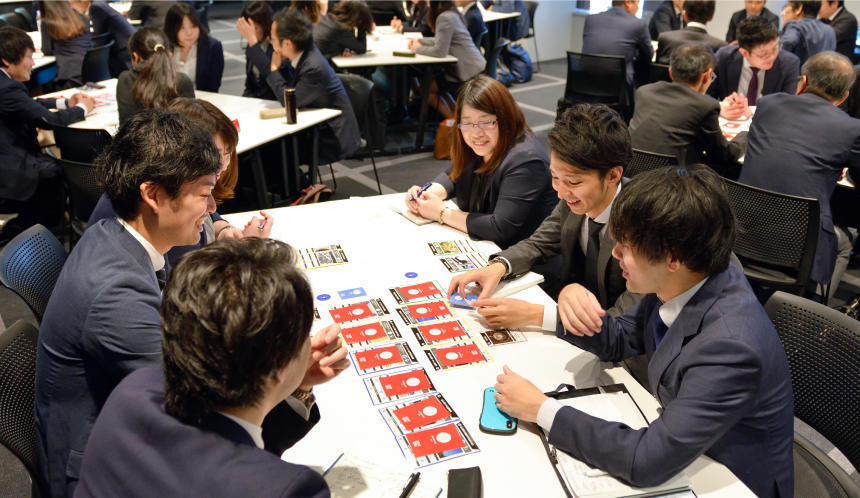 In the first half of the game, each team acted only in accordance with their own project interests, but before anyone knew it, the economy, environment, and society elements that make up the “World Condition Meter” were out of balance. We heard participants saying “The economy is booming, but the scores on other meters are at zero. This can’t be good for the world.” 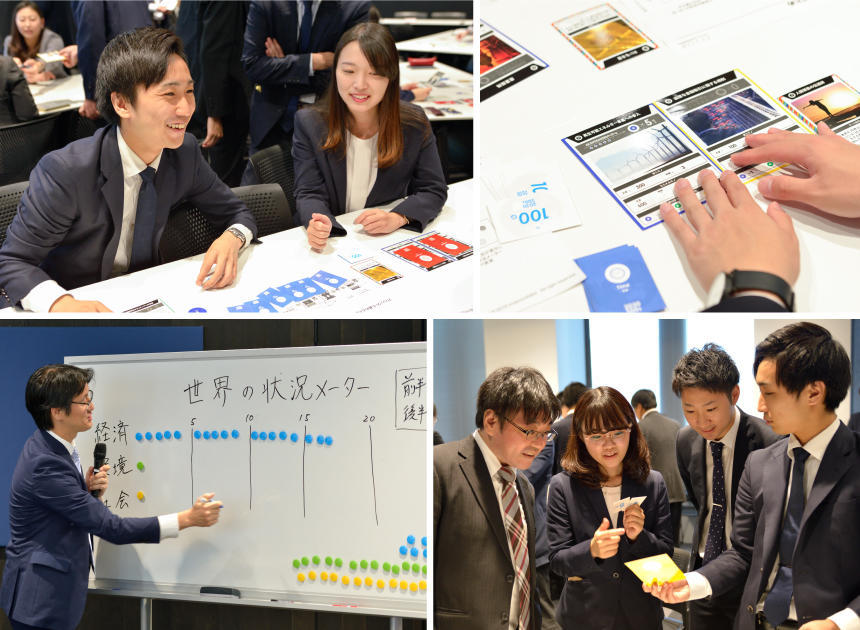 In the second half, an increasing number of teams acted with consideration for the overall balance of the world, and when trying to get projects done there was even the start of negotiations asking: “we have a surplus of money, would you trade that for time?” Lines of communication opened up, including each team supplying information on their own situation to try to help struggling teams, and eventually the “World Condition Meter” moved to a position most people was happy with.

After the game, we talked to the participants.

Ms. Ohba said: “What was encouraging was that the teams that achieved their objectives first asked us what we were struggling with. It made me realize that each of us has to be prepared to pitch in if we are to achieve the SDGs.”

Ms. Iizuka said: “Our team achieved our objectives quickly, and I think that was because we actively communicated with other teams about swapping cards. I took part because it has overlaps with how we work.”

Mr. Yamagaito said: “I learned that achieving only your own objectives is not enough to create a thriving world. That viewpoint is also very important in work, and it has given me the motivation to think about what I can do not only in my own classroom, but also for society as a whole. I want to discuss the SDGs with lecturers and students when I get back to my classroom today.”

Training initiator Mr. Kanbara said: “It went so well that many people said they’d like to do it again. We’d like to start including SDG viewpoints in children’s academic support, and I think getting staff to talk to students and caregivers about our company’s SDG-related activities in their own words is an important task. I believe everyone will be able to use what they have learned in this training in such situations, and I hope that this will be a growth opportunity that stimulates people to think about what they themselves can do for society.”

We will continue to provide opportunities for employees to act on their initiative.

(*1) This employee workshop was made possible with the cooperation of employees at Benesse Holdings, Benesse Corporation, and Shinken Ad (part of the Benesse group) who are accredited SDGs 2030 facilitators.
Imacocollabo’s 2030 SDGs Game:
https://2030sdgsgame.com/2030-sdgs-game/