Approximately 60% of fathers of infants and preschoolers want to be more involved in housework and childcare: the difficulty of work-life balance

With all the talk of work-style reform these days, how do working people feel about the balance between work and home life? The following article reports on the attitudes and realities of fathers of infants and preschoolers concerning work and home life, based on results of a survey conducted by The Child Sciences and Parenting Research Office of the Benesse Educational Research and Development Institute (BERD).

The average bedtime for infants and preschoolers is between 9 and 10pm. Fathers often return home later than that.

The time a person return home is one of the indicators for looking at actual work-life balance. Fathers who return home ‘between 7 and 8pm’ and ‘between 8 and 9pm’ account for 40% of the total (see figure below). The range indicates a peak in the 7~9pm time frame, while around 7% of fathers return home before 5pm and 20% after 10pm.
Since the average bedtime for infants and preschoolers is between 9 and 10pm (according to a BERD survey of infant life), fathers cannot always return home while their children are still awake, and the opportunities to be involved in caring for their children during the week are extremely limited.
Even over time, this trend has not changed much since around 2005. 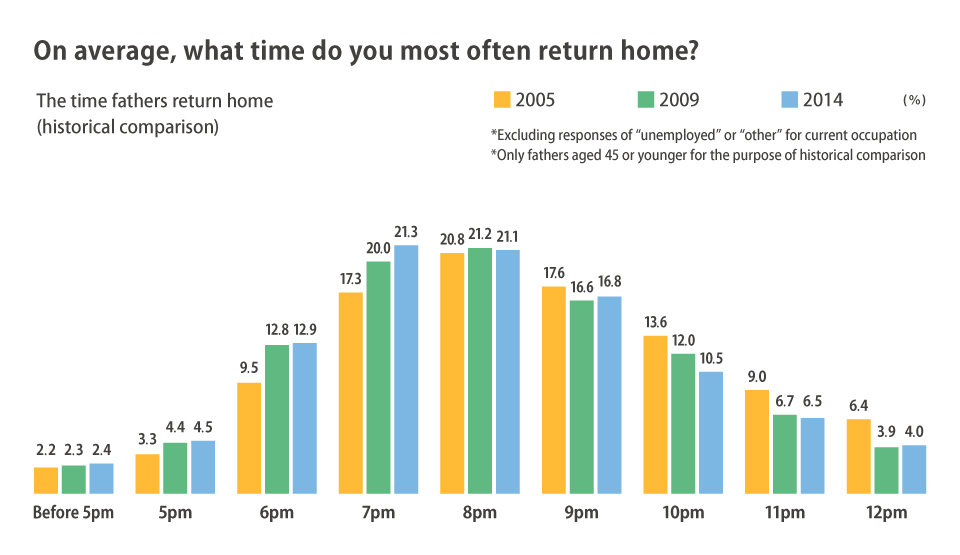 There are still big social obstacles for fathers involved in childcare

Enhancement of workplace measures such as childcare leave and flextime systems is essential to achieve work-life balance, but in order to be effective, qualitative elements such as an appreciation of and a culture of childcare are also important.
In the figure below, when fathers were asked about the workplace atmosphere concerning childcare, the statement that received the highest ‘agree’ response (73.6%) was “It is easy to take time off when a child is born ※1”. On the other hand, only 35.1% responded ‘agree’ to the statement “There is a corporate culture which considers it important for men to participate in parenting ※1”.
To some extent, there is an increasing appreciation in the workplace for participation in scheduled and expected childbirth and events as well as for children’s sudden illness, etc. However, the atmosphere and culture in the workplace and in society at large doesn’t appear to be improving.

Fathers genuinely “want to be more involved in housework and childcare”

To begin with, how serious are fathers themselves about housework and childcare?

As we can see from the figure above, around 60% of the fathers in the 2014 survey responded that, ‘yes’, they would like to participate more in housework and childcare, while 8.9% responded ‘no’, and 32.9% responded ‘neither’.
Compared to previous surveys, in the 9 years since 2005 the percentage of fathers who answered ‘yes’ increased.
However, only 5.14% of male employees take childcare leave (FY2017, Ministry of Health, Labour and Welfare), far off the government’s target of 13% by FY2020.
That suggests that in order to realize work-style reform, in addition to an enhanced system which supports reform, there needs to be a change of attitude in society as a whole to meet the expectations of those fathers who want to be more involved in parenting.

‘Ikumen’, an expression meaning men who take a proactive role in child rearing, was one of the top 10 most popular expressions of the year in 2010. Since then, there has been growing momentum to seriously re-examine work-life balance, including the government’s work-style reform undertaking. We will need to think about a perception of family which is not bound by the conventional framework and come up with solutions to meet the needs of society in the future, including a system which supports fathers as well as mothers.

*This article was based on a research report by the Child Sciences and Parenting Research Office posted on the BERD website (in Japanese only). The figures used are reprinted from that website.