As part of its CSR activities, Benesse Holdings works to provide support for children’s learning. Here we report on discussions at a February 2018 symposium held by specified non-profit organization Kid'sdoor titled: “Seven Years On From the Great East Japan Earthquake: How to support children in the disaster-hit areas going forward”. 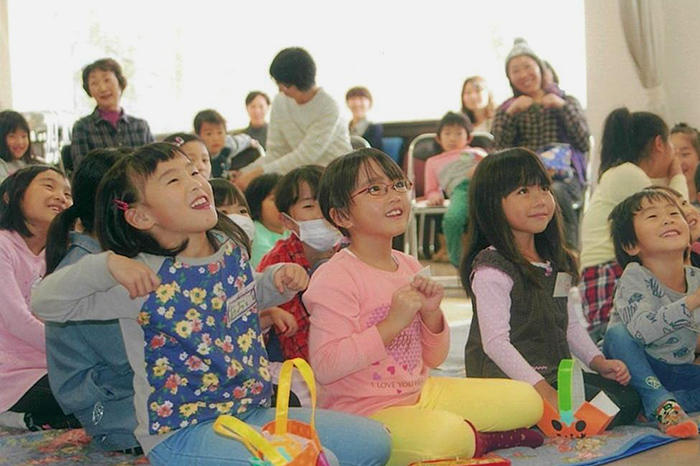 On Friday 23 February 2018, specified non-profit organization Kid'sdoor held a symposium under the title “Seven Years On From the Great East Japan Earthquake: How to support children in the disaster-hit areas going forward” at the All Japan Real Estate Federation’s Zennichi Tokyo Hall. The symposium featured presentations on the current state of damaged areas in the Tohoku region and the support activities being provided for children, as well as examining from a variety of perspectives what support children in the areas need going forward. As part of its CSR activities, Benesse Holdings works to provide support for children’s learning. In light of the discussions at the symposium on supporting children in the disaster-hit areas, we have considered the “kinds of learning required by the children who will be leaders of the future.”

The keynote address was given by Mr. Jin Sato, Mayor of Minami Sanriku, Motoyoshi District, Miyagi Prefecture. Under the title “Seven Years On From The Great East Japan Earthquake: results and future issues”, Mr. Sato gave an explanation of the recovery efforts since the disaster using photographs and video from the time. This was followed by a presentation titled “Ideas for the future support for children in the disaster-hit areas,” comprised of individual speeches on different themes by Ms. Yumiko Watanabe, Chairperson of NPO Kid’sdoor, NPO Kid’sdoor Assistant Coordinator Mr. Akira Sato, Director General of Benesse Foundation for Children Ms. Chie Ryu, and Mr. Yousuke Ainai, from The Great East Japan Earthquake Rehabilitation Support Foundation, a public interest incorporated foundation which provides support services in the disaster-hit areas of Tohoku. The representatives of each body talked about the support they are providing to children in the disaster-hit areas.

Benesse Foundation for Children’s Ms. Ryu spoke on “Lessons from cooperation at the frontline of learning support for children,” highlighting issues that have been brought into focus by providing assistance to the bodies working to support learning for children in the disaster-hit areas. The main issue is “securing and developing staff leaders.” Ms. Ryu said: “There is a big gap between regions in both the number of organizational staff that are the core of support for children and in the number of student volunteers. There are some bodies that are having difficulty continuing their efforts due to weak structure, even though their activities are useful, and bolstering of these structures is an issue. Moreover, there are problems that are difficult to tackle by one body alone, and I would like to work on the creation of cross-body ties, such as via exchange meetings between the various aid organizations, and on how to enable the sharing of know-how.”

As Ms. Ryu also noted, a key theme of this symposium is “developing staff to support rehabilitation.”

NPO Kid'sdoor Chairperson Ms. Watanabe said that immediately after the disaster the main priority was to get children’s learning back to zero from the negative territory into which it had fallen. Seven years on from the disaster, however, there is now a need to focus on developing children as regional leaders in order to move from zero into positive territory.
Ms. Watanabe said: “Owing to the life-changing experiences that the disaster inflicted on them when they were elementary, junior-high, and high school students, many of these children are now thinking “What do I want to do with my life?”, and it is my wish to develop these children into people who can rehabilitate the Tohoku region.”

As a tangible measure toward this goal, Kid'sdoor is supporting students via the operation of the “Shisho Gakusha” public cram school at Miyagi Prefectural Shizugawa High School in Minami Sanriku. Ms. Watanabe reported on the holding of the “U25 Tohoku Social Business Contest,” a business contest to foster a new generation of leaders to support the rehabilitation and development of the Tohoku region.

After the symposium, we interviewed Benesse Foundation for Children’s Ms. Ryu. She said: “The spread of the nuclear family in recent years has weakened the bonds between children and society. In order to make a better society, I think children, as well as us adults, need to interact with society and the region from a proactive standpoint. Our foundation defines this ability to interact proactively with society as “social leadership.” The disaster has brought social issues such as population decline into greater focus in the Tohoku region, and the problem of a shortage of people to be an area’s next leaders is something that each region will have to face up to going forward. In my view, it will be crucial to develop a sense of “social leadership” in all children in order to make a better society. Here at the Benesse Foundation for Children, we are strengthening ties with NPOs and other groups working to support children in the region, while also aiming to support the development of the next-generation of regional leaders.”

Following the disaster, the children who will lead the Tohoku region of the future have themselves become aware of the issue, and have become actively engaged in volunteer work and tourism promotion activities with a view to re-vitalizing the region. The issue of “a shortage of regional leaders” is not only a problem for the disaster-hit areas, but is something that affects all regions owing to the fall in birthrate and aging of Japanese society. To support the children facing this challenge, we need to think about not only what we can do at the regional level, but also about the overall efforts we can make as an education company.