In the educational sphere, a nationwide movement is underway to develop new educational programs that go beyond existing formats by connecting with art, technology, and various other fields. We would like to introduce you to “Communication education using robots”, an experimental initiative between Benesse and the COI Research Promotion Office at the Tokyo University of the Arts. 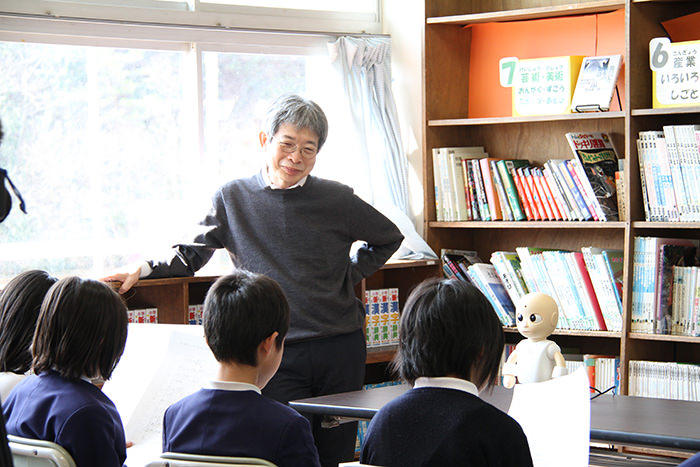 Making conversation with the “CommU” robot

On 13 March, playwright and artistic director Oriza Hirata (Project Professor, Public Collaboration Center, Tokyo University of the Arts and leader of the Seinendan Theater Company) gave a model class titled “Communication education using robots” at Gonoshou Elementary School in Toyooka City, Hyogo Prefecture, Japan.
The class involved a group of 4th graders, and was an experiment in creating functional learning for the children through “theater” on the theme of communication.
Based on a predetermined script, a programmed robot named “CommU” delivered a number of lines at a constant tone but with varied pauses between the lines. In order to establish a natural conversation, the children had to work in groups to create their own lines and eventually try to have a conversation with the robot in front of the whole class.

CommU delivered 17 lines in all, some of which we show here:

CommU: So tell me, what is your hobby?
CommU: Ohh, that’s great.
CommU: I have not yet seen that in real life.

The lines were scripted on the assumption of everyday conversations, but the content of each conversation would change significantly depending on what words the children said to CommU.
In addition, because the length of the pauses between each of CommU’s line was not always the same, the children had to tailor the length of their own lines in order to avoid any unnatural gaps.

During the class, Mr. Hirata and teachers from the school first tried to make conversation with CommU.
Then it was the children’s turn to think up lines based on what they had seen. Split into groups of four or five, the children first read through a printout of CommU’s lines. They then thought about the words they would say to make a natural conversation and wrote them into the pauses between CommU’s lines to come up with a completed script for conversation with CommU.

In their groups, the children were heard saying things like: “When we speak to CommU, should we use polite language forms?”
“We have to choose a hobby which can make CommU say whether it has seen it in real life, so let’s say watching musicals!”
“Should our last line to CommU be a question “Shall we go and see a musical together?”, or an invitation “Let’s go and see a musical together”? 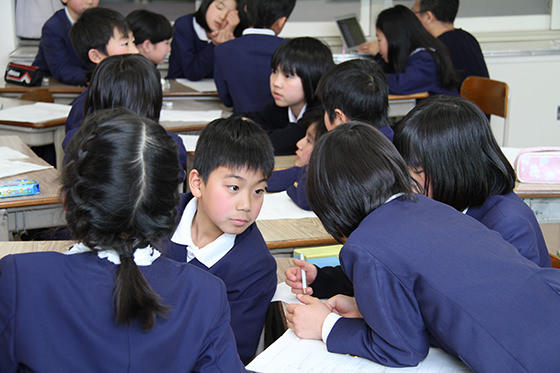 The children became excited to be having their first conversation with a robot and were engrossed in discussions for about 20 minutes. As they wrote and revised their lines the overall shape of each conversation began to emerge, and that’s when they began to sense problems with the fine details.
These included what they should take with them when they went out with CommU.
The script called for them to choose several things to take with them if they went out with CommU to enjoy their hobby. One group, having decided that their hobby was watching musicals, realized that their first choices of taking a camera and boxed lunch were not natural and so restarted discussions.

“We can’t take a camera to a musical!”
“A boxed lunch? No, no, you are not allowed to eat inside a theater.”
“Mr. Hirata said that because this was theater we could use fiction, didn’t he? So shall we change our hobby from musicals to mountain climbing?”

Groups whom had finalized their lines practiced with CommU and received advice from Mr. Hirata.
Actually acting out the lines revealed further unnatural parts of the conversation, and led to more group discussions.

“The way it is now, there would be weird gaps before CommU speaks, so we should add in some expressions like “That sounds fun” and “That’s right.”
“At the end, it would sound natural if we all said to CommU “See you tomorrow!”

Interacting with a robot, connecting with friends

The climax of the class was the presentation of the conversation with CommU in front of the class. The groups took it in turns to talk with CommU with a focus on the “hobbies” they had chosen, which included watching a baseball game, the Tokyo Olympics, and mountain climbing. 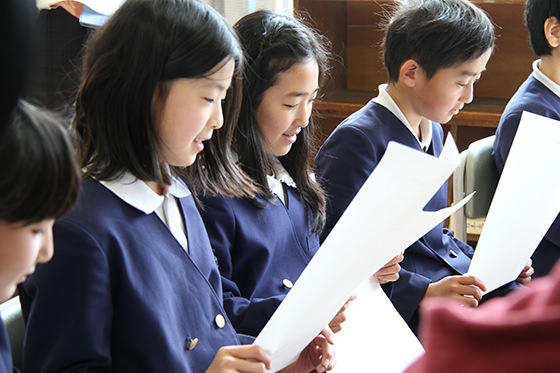 CommU is only able to speak a predetermined script at a set pace and tone, but demonstrated different relationships with the children as the groups changed.

Via a class in which they had to create a conversation with a robot, the children learned by experience the importance of semantic connections and the gaps between each word in making a conversation. However, a deeper level of communication than that with CommU was achieved between the children within each group.
After the class was over, we spoke with Mr. Hirata and School Principal Tamotsu Torii about why they had held the session

The value of this class 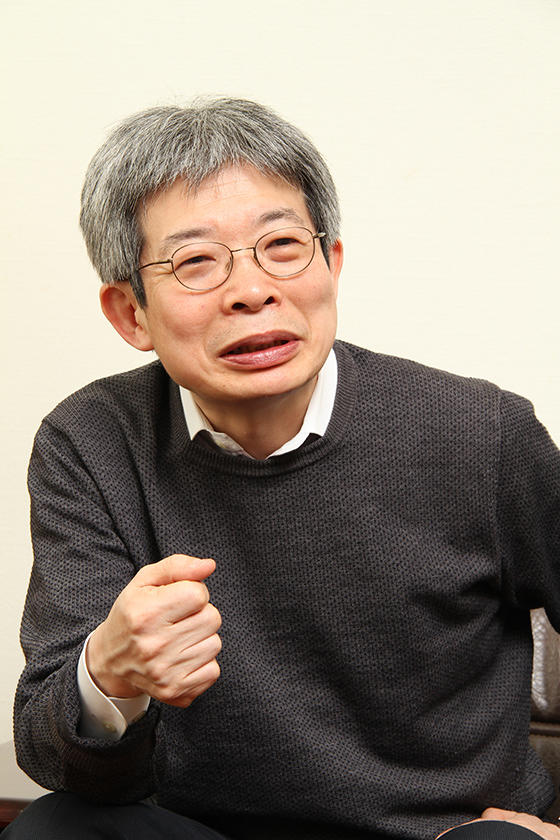 “By making them communicate with a robot, which in some respects is an unnatural partner, we were asking the children in today’s class to join forces with each other. The process of working together will naturally see clashes of opinion, and that requires them to reach compromises. Through both their interaction with the robot and the connections with their friends, it should have made the children think about ways to establish communication.” 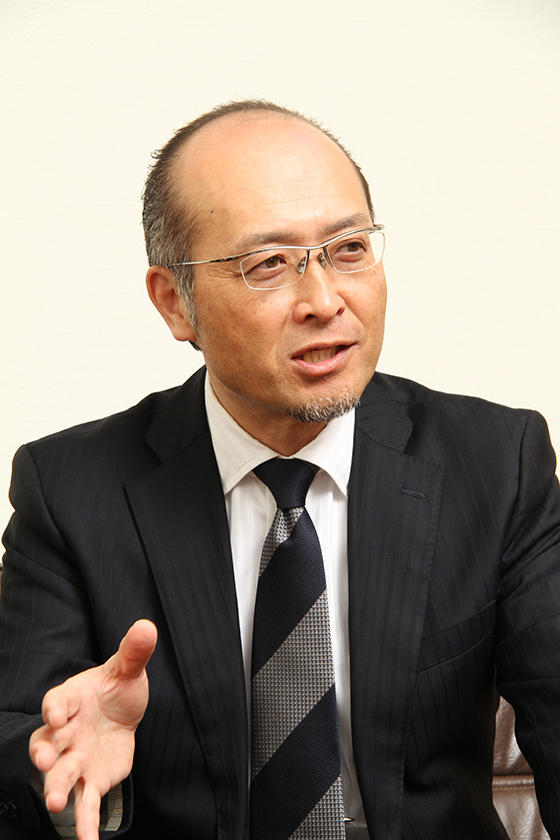 “Communication is the bedrock for all subjects, and also the foundation for being a good citizen. Today’s class made the children talk with each other and make compromises toward a common goal. I hope to try out other things to help develop this, including in everyday classes that touch on the power of dialogue with children.”

This class used a robot as a teaching aid to foster communication skills, abilities which seem set to become an increasingly important in society.
We talked to Ms. Chie Hoshi, Research Manager in the Product Development Promotion Department at Benesse Corporation, who took part in the class a member of the COI.

“We at Benesse want to cooperate in other such new initiatives in the educational sphere and share the knowledge gained widely with society.”
“Mr. Hirata’s class not only focused on communication skills that considered the position of the other person, but also on working together with others as part of a team. In addition, while creating their own lines to match up with those said by CommU, the children had to be able to determine the necessary conditions, such as things that would make someone say “Wow”, things you could see in real life, and things you could take with you, and then to choose and combine elements that met those conditions. In other words, they had to apply programming-like condition construct thinking. As a consequence, such a class has the potential to help foster the diverse capabilities that are crucial for children in modern-day society. We hope to work with various research organizations in finding ideas to make better everyday classes for schools. “

The Center of Innovation (COI) program is one of the main funding programs under the Center of Innovation Science and Technology based Radical Innovation and Entrepreneurship Program (COI STREAM), launched in FY2013 by the Ministry of Education, Culture, Sports, Science and Technology (MEXT) and the Japan Science and Technology Agency (JST). It aims to break out from the frameworks of traditional research fields and existing organizations in order to realize radical innovation via industry-academia-government collaborations. As part of this program, the COI program at the Tokyo University of the Arts works mainly on R&D that applies content created by fusion of art and technology to the fields of education and nursing care. Benesse Holdings began participating in the program from FY2015. This model class, “Communication education using robots”, is one of the projects operated by the COI program at the Tokyo University of the Arts. By trialing such experimental programs, Benesse Holdings aims to give back to society through findings on new ways of learning that help develop spiritual richness in the children that will live in the society of the future.

Born in Tokyo in 1962. Playwright, director, artistic director of Komaba Agora Theater, leader of Seinendan Theater Company, artistic director of Kinosaki International Arts Center, Project Professor, Public Collaboration Center, Tokyo University of the Arts, and visiting professor of the Osaka University Center for the Study of Co* Design.
Mr. Hirata’s works have been translated and published in many countries around the world, particularly in France. Japanese language junior high school textbooks from FY2002 onward feature materials based on Mr. Hirata’s workshop methodology, giving many more children the experience of exploring theater in the classroom.