Japanese working mothers struggling all alone: the keys to a better work-life balance based on a four-country comparison

The proportion of mothers who continue working after the birth of their first child is increasing in Japan, and has now overtaken the proportion of mothers who leave their jobs after giving birth. *1
However, an international comparative study of working mothers raising toddlers in large cities in four countries (Japan, China, Indonesia, and Finland) conducted by Benesse Educational Research & Development Institute（BERD） *2 indicates that Japanese mothers have the lowest level of satisfaction with their work-life balance among those surveyed.
Are we still so far away from an era in which Japanese women can have satisfying lives both working and raising children? We would like to highlight some of the main takeaways from this international comparative study. 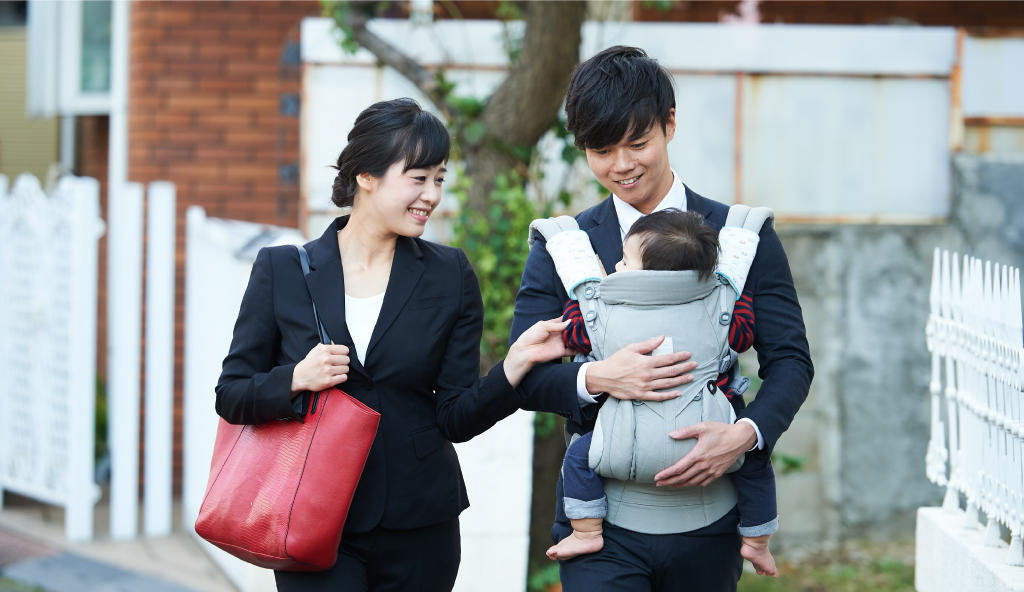 BERD has announced interesting findings about work-life balance among working mothers gleaned from its “International Survey Research on Home Education in Early Childhood -Parents in Four Countries:Japan,China,Indonesia, and Finland, 2017” *2, which covered mothers caring for toddlers in large cities.
*All figures are taken from the survey conducted by BERD(2017) 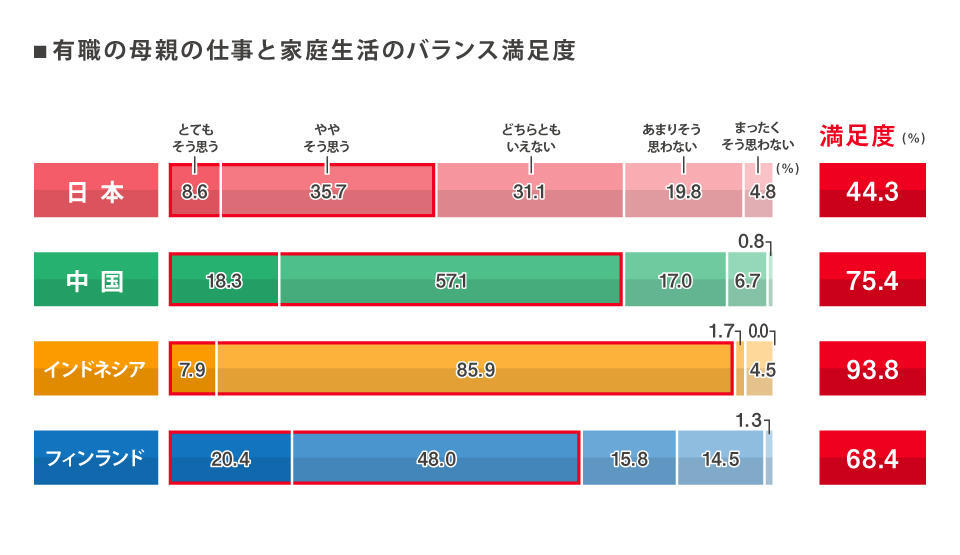 The above result shows mothers’ degree of satisfaction with their current work-life balance, and indicates a score for Japanese mothers of just 44.3%, much lower than the figure for the other three countries studied. As this could the product of a number of factors, we would like to examine an average working day in the life of a family.

Mothers have around four hours of post-work chores before the child’s bedtime: Japanese mothers handling housework and childcare all alone

This schematic visualizes the average day of a working mother in major cities in Japan, China, Indonesia, and Finland. Most working mothers in Japan get home between 6pm and 7pm, and some have about four hours of chores before the child goes to bed (the average bed time is between 9pm and 10pm). They tend to handle more of the housework and childcare on their own than mothers in the other countries.
How does this compare to the situation in the other countries? The main difference is that mothers in the other three nations receive help from others around them rather than having to do it all themselves.

China: Most mothers get home between 6pm and 7pm, the same as in Japan, but there is strong support for housework and childcare from grandparents (reported by about 60%), with more than 50% living in the same house as the grandmother.

Indonesia: Although housework and childcare are widely seen as women’s duties, there are stronger local community bonds than in the other countries, and neighbors therefore help each other out on childcare.

Finland: Most mothers and fathers get home at roughly the same time, between 4pm and 5pm, and due to societal views on gender equality, housework and childcare is shared equally.

Around 40% of Japanese fathers get home after the child’s bedtime, and only around 10% of grandparents provide help on a daily basis. In addition, research shows that even when accounting for help in the form of social support, such as babysitters and private and public childcare facilities, less than 10% of mothers get any assistance.

According to Ms. Seiko Mochida (Senior Researcher, Benesse Educational Research & Development Institute), who has analyzed the results of the survey:
“Japanese mothers perhaps hesitate to draw on social support, and this could be due to a variety of reasons including resistance to an outsider coming into their home, a sense of guilt about not handling childcare and housework, unease about leaving their child with someone else, and issues of cost.”

What can be done to improve things? Spotlight on neighbor support and utilization of services

Implementation of work style reforms has only just begun in Japan. If progress in this area means that mothers and fathers can start getting home earlier, there may be changes in the use of time and the division of housework and childcare duties. However, such changes are likely to take some time.

Benesse will continue to provide information from a variety of viewpoints in order to help working mothers shape their own lifestyles and to create optimal environments for raising children.

*2 Benesse Educational Research & Development Institute conducted the “International Survey Research on Home Education in Early Childhood -Parents in Four Countries:Japan,China,Indonesia, and Finland in 2017. As well as investigating the mother’s role in the development of “capabilities for learning” in the toddler years, the survey looked into lifestyle patterns of the parents, mothers’ thinking on education and childcare, and their expectations for their children.

This article was amended on the advice of Benesse Educational Research & Development Institute.

Seiko Mochida, Senior Researcher, Benesse Educational Research & Development Institute
Ms. Mochida joined Benesse Educational Research & Development Institute in 2006, and has been in charge of the survey since 2016. She studies changes in attitudes and lifestyles and the impact of external conditions amid increase in responsibilities for people with families, areas in which she has personal experience.